Kaizer Chiefs goalkeeper Itumeleng Khune and his friend Lehlohonolo Majoro recently spent time away from the field of play and enjoyed a vacation. The two former Amakhosi teammates are seen in a viral video having good times with their friends while Khune had his wife, Sphelele Makhunga, at his side.

Majoro is currently contracted to AmaZulu in the DStv Premiership and the two players are still friends since their playing days at Naturena. Majoro posted a video on Instagram showing the two buddies enjoying their friendship as they also rode on quad bikes. 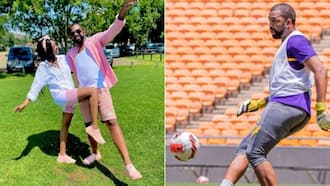 Briefly News looks at the reactions where former players such as Siphiwe Tshabalala also shared their comments to the viral video clip. Majuro wrote on his page:

“Where is this Major hle.”

Back to football, Itumeleng Khune will hope to return to the first team after this current FIFA international break as he is yet to feature for the Soweto giants in the DStv Premiership. On the other hand, ‘Major’ has found the back of the net on one occasion from nine matches in all competitions for the Durban-based Usuthu. 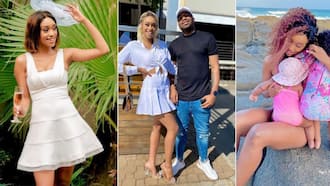 Inside the luxury Life of Itumeleng Khune’s wife, Sphelele Makhunga

In a previous post, Briefly News reported that Sphelele Makhunga is one of the most recognised faces on social media platforms and that’s because she’s married to one of the most celebrated footballers.

That is none other than Kaizer Chiefs and Bafana Bafana’s favourite goalkeeper, Itumeleng Khune.

Briefly News takes a look inside the luxury life of Itu’s wife. We dig deep into her vacations, clothing brands and the cars she drives. In our investigation, this website picked up that the stunning lady seems to be sponsored by Puma SA, Huggies South Africa and Purity SA, among other brands.

Sphelele was recently on a vacation to spend a day with her child and managed to interact with elephants.

South Africa shouldn’t be on the red list. Here’s why

When will travel and tourism return to normal post-COVID?

What South Africa and Omicron tell us about inequality